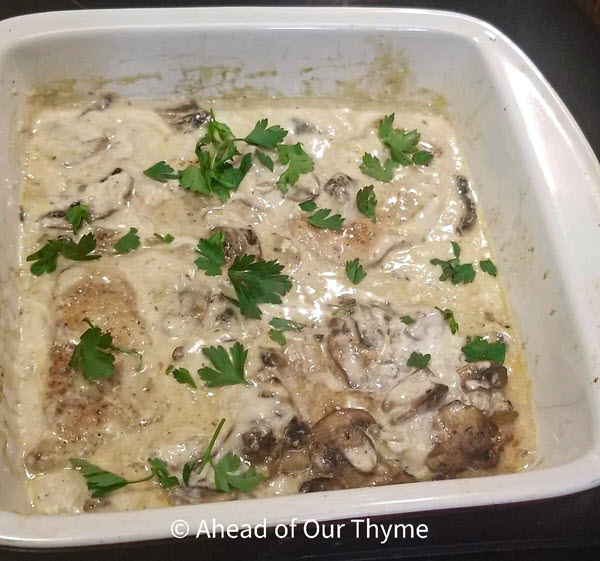 And, like most of our recipes here, baked cream of mushroom pork chops are easy to make.

The great thing about this mushroom pork chops recipe is that you probably have all the ingredients in your kitchen.

That’s it! And it tastes so good.

How Long Does It Take to Cook Baked Pork Chops with Cream of Mushroom Soup?

This mushroom pork chop recipe has flavor, and you can make it in just 45 minutes.

Oh, and if you like, you can add thinly sliced potatoes for a one-pan pork chop skillet dinner. I’m not doing that tonight, though. The only reason is that I have a huge bowl of leftover loaded potato salad in the refrigerator.

And I’ll make a loaded cauliflower casserole, too. With cheese. Lots of cheese.

I think this dish is also called pork chops abracadabra, especially when you make it in a slow cooker. Crock Pot pork chops for the win!

At any rate, it’s easy to do comfort food. And kids like it, too.

Well, I told y’all what I was making to pair with the creamy mushroom pork chops, but just about any side dish would work.

Here are some more yummy pork chops side dish ideas.

And pork chops also go well with more pork chops:) And did I mention mashed potatoes?

It really doesn’t matter if you get bone-in or boneless pork chops. for this recipe. You can choose whatever type of pork chops you prefer.

However, it’s best to get about 1-inch pork chops. If you can’t get those since there aren’t that many selections at the store these days, just don’t bake the pork chops as long.

They are ready when the pork chops reach 145 degrees internally.

The pork chops go so well with the diced onion and the creamy mushroom sauce with extra mushrooms thrown in.

And to give it a little kick, we’re going to toss in some Cajun seasoning and garlic in this recipe. I like Slap Ya Mama Cajun Seasoning, but Tony Chachere Creole Seasoning is just as good.

Do I Have to Use Cream of Mushroom Soup to Make Mushroom Pork Chops?

We’re just going to turn the soup into a form of gravy or sauce for the cooked pork chop dish.

Cream of potato soup might also work out. Just think of what soup would work out as a base for the gravy, and it should be fine.

Do you want a super unique flavor for your baked cream of mushroom pork chops? Consider using onion soup.

You can also use sour cream for a ton of flavor. You can use flour to thicken the sauce.

I’ve made this baked pork chop recipe with mushroom soup and with chicken soup. Both choices of soup are just as good as the other. Once again, I looked at what was in the pantry, so I decided on mushroom soup.

How to Make Cream of Mushroom Pork Chops

Cream of mushroom pork chops is an easy peasy recipe to throw together.

You’ll start by preheating your oven to 350 degrees. Add Cajun seasoning to both sides of the pork chops. 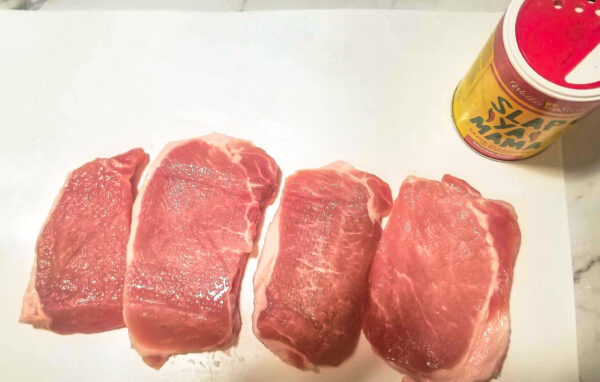 Now you’ll melt some butter in a pan over medium heat. Add the butter to the pan. When it gets hot, add the onions, and mushrooms. Saute until tender. Add the garlic, stirring for about 30 seconds. I usually use more garlic than most people, so I toned down the garlic in this recipe. 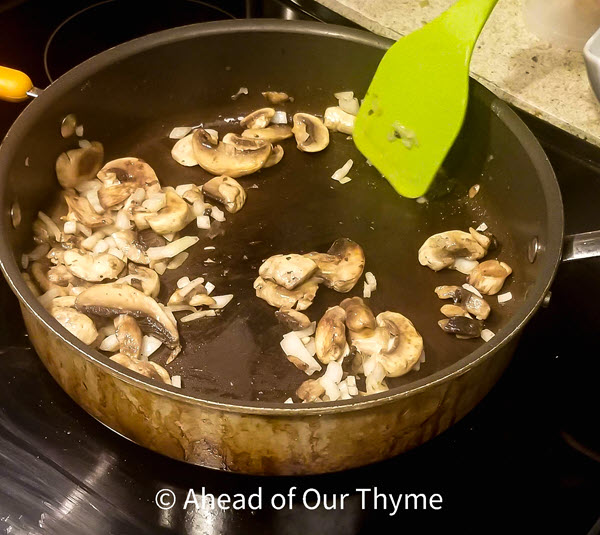 Add the pork chops and brown them on each side, pushing the other ingredients in the pan aside. 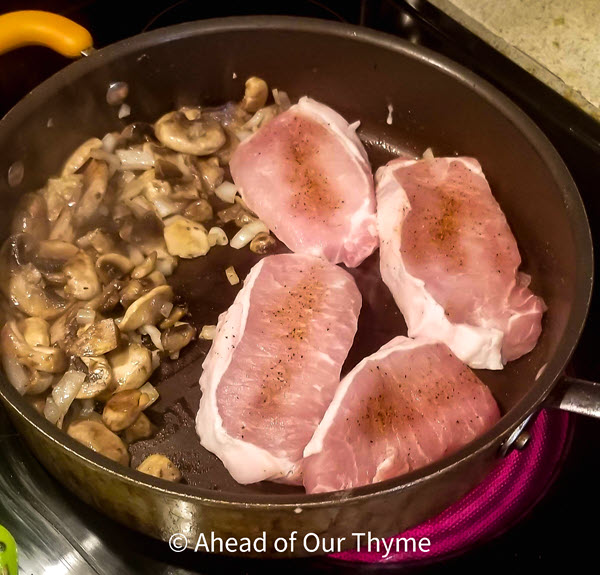 Mix together the soup, milk, and Worcestershire sauce in a bowl. Put the pork chops in a baking dish. 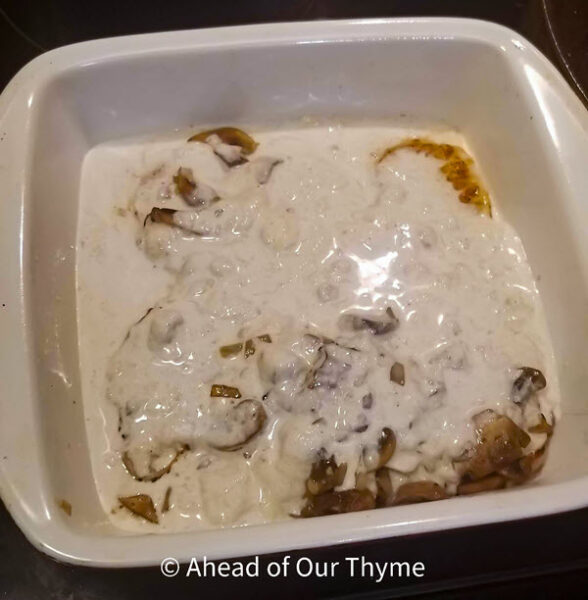 How long do you bake pork chops in the oven at 350 degrees? You’re going to bake the cream of mushroom pork chops at 350 degrees until the pork reaches an internal temperature of 145 degrees. This will take about 25 minutes.

And the mushroom gravy is good as a dip for crusty bread or poured over garlic mashed potatoes.

It’s a similar tasting sauce as you get from smothered pork chops. However, the base of that sauce is chicken broth.

I tend to like dishes that have gravy or sauce with them. And the sauce thing is why I’m not losing weight even though I exercise.

The love of sauces must be a New Orleans thing. My aunt had sky-high cholesterol levels, and she said she just loved sauce with her food.

OK, skinny people, how do you do it? I’m not going to use yogurt in the place of a delicious sauce. Although, I do use a yogurt sauce with baked salmon.

But that’s not happening here. This is a sauce-friendly mushroom recipe. So there, world! The sauce stays. 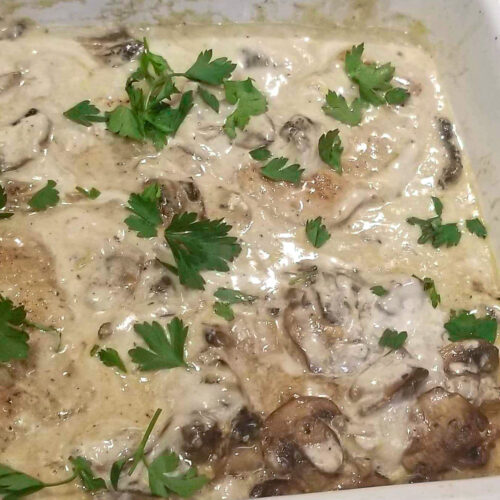 Are you ready for some delicious pork chops abracadabra or smothered pork chops? These baked pork chops with cream of mushroom soup will make your day (and your dinner).