A delicious white beans and ham recipe. It doesn’t get more Southern than that.

Oh, wait. It does if you serve it with cornbread. I make this dish at least a few times per year, and I’m craving it again. So, tonight I’m going to soak the Northern beans so I can whip this easy-to-make meal up tomorrow. 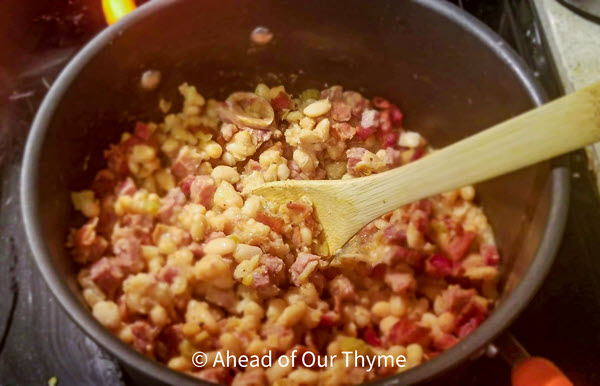 Most recipes call for just the Northern beans and ham with seasonings, but I like to add a few pieces of bacon in my bean and ham recipe for added flavor.

And who can say no to bacon? Not me! 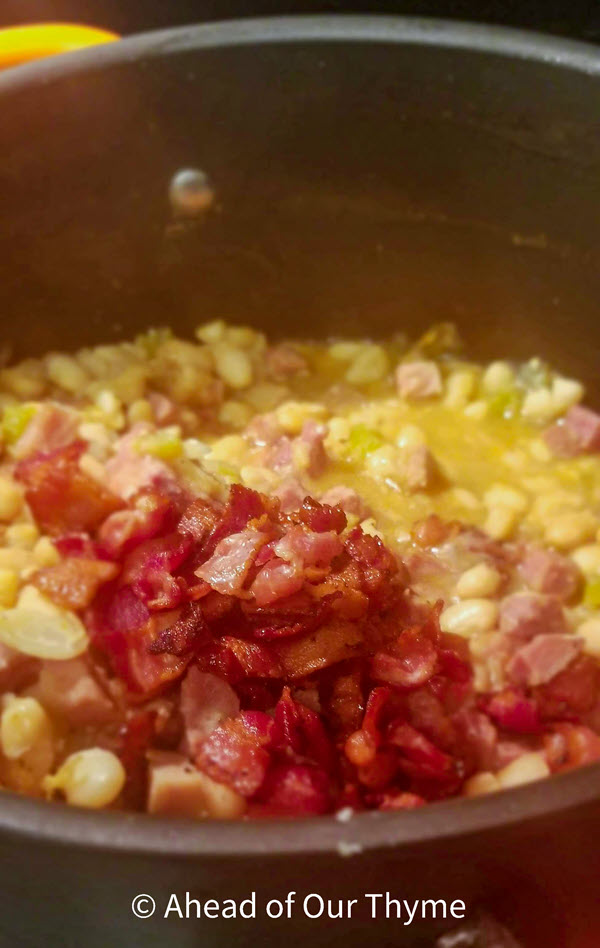 Like almost all of the recipes on this site, this is an easy bean recipe to make, and you’ll have leftovers to toss in your freezer.

What Ingredients Will I Need for White Beans and Ham?

You’ll probably already have most of the ingredients for this white Northern beans and ham recipe in your kitchen.

And you can add extras like diced green bell pepper. You can substitute the ham with ham hocks in this recipe if you like.

Ham hocks make a delicious broth to go with your Northern beans. I’ve used ham hocks in bean soup, and it is so good.

What can I add to ham and beans? Alternative Ingredients

You can make lots of substitutes for this white beans and ham recipe. There are also some add-ins you can use for more variety. 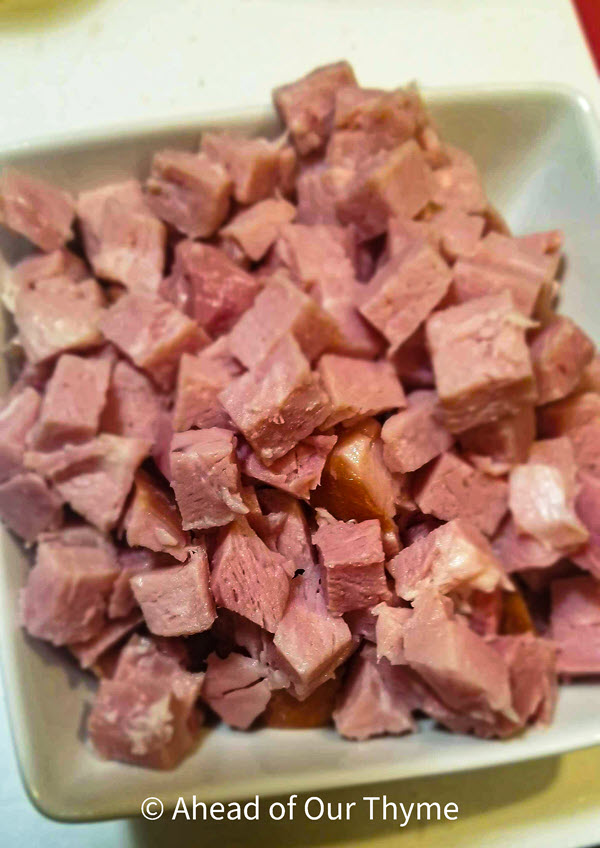 What Seasonings Do You Put in Ham and Beans?

Are you asking, “What spices should I put in ham and bean soup?” Here are the seasonings you need for white beans and ham.

What Goes with White Beans and Ham?

I’m making mine with a nice salad and cornbread with sausage, cream corn, and cheese cooked into it. I’ll do a recipe on that here in the near future.

And honestly, I’m not even sure those two things go together well, but it sounds good to me, so sausage cornbread it is!

You can also make slow cooker white bean and ham or use an Instant Pot for this smoked ham and bean recipe. I prefer to make my bean recipe on the stove instead of a slow cooker or Crock Pot, well, I guess because I like the smell in my home as it cooks away.

I never really got into slow cookers. OK, that’s not entirely true. I did use my slow cooker a lot back in the day when I worked in an office.

So, I’d throw everything in the slow cooker, then when I got home, dinner was ready. I might look into using my slow cooker again soon. 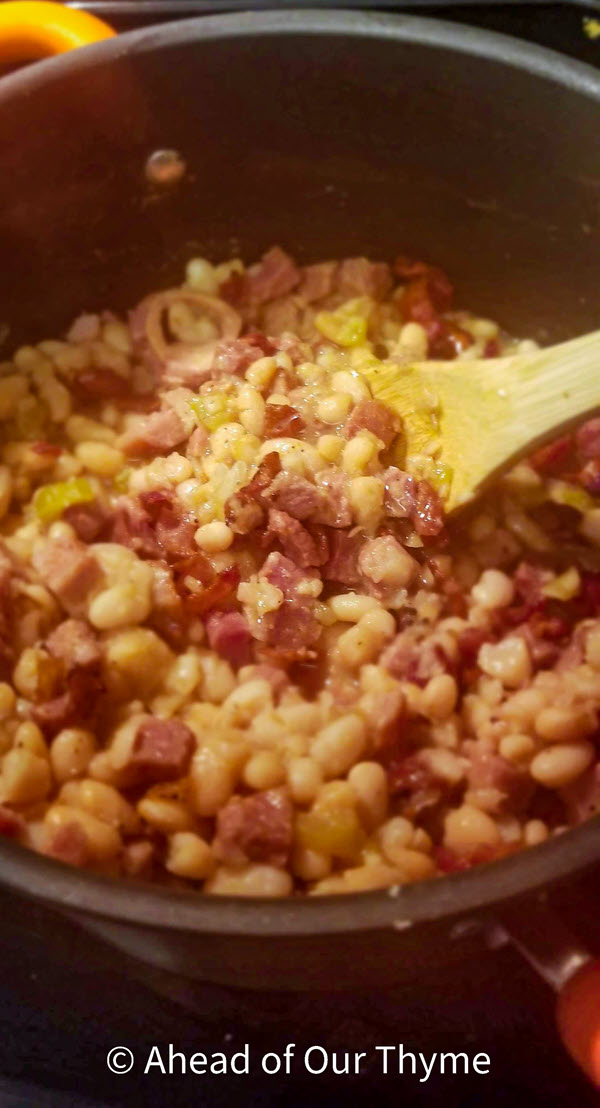 Below, we address some of the most frequently asked questions about white beans and ham.

What kind of beans do you put in ham and beans?

White beans and ham soup is made with great Northern beans.

Alternatively, you can also use any type of dried beans to make this recipe, including dry bean options such as cannellini beans, navy beans, or lima beans to make white beans and ham.

You can use pinto beans to make this recipe, too.

Can you make ham and beans with navy beans?

Yes, navy beans are an excellent option for making easy ham and beans.

Do you have to soak beans for ham and beans?

Technically, you don’t have to soak beans before cooking them. However, you’ll have better results if you do.

To cook beans without soaking them, simply cook them for longer. When the beans are tender, they’re done.

How do you thicken white bean and ham soup?

Add more chicken broth to make this white beans and ham recipe into a soup.

If your Southern style white beans and ham don’t thicken as much as you would like, smash some of the beans on the inside of the pot. You will do this sort of like you do with potato soup. You can even use a potato masher.

Or you can take out 2-3 tablespoons of broth and stir in 1 tablespoon of cornstarch, then put the slurry in the Nothern beans.

Can you freeze white beans and ham?

Absolutely! White beans and ham freeze beautifully and retain their flavor. You can pack the beans and ham into zipper freezer bags or freeze them in a sealed container.

We love these containers for freezing white beans and ham soup.

Can you use canned beans for ham and beans?

Sure you can. Just skip the step of soaking the beans, and you can make navy bean soup with canned beans. The flavor may be slightly different, but you can get around this somewhat by rinsing the canned beans well.

If you make white beans and ham with canned beans, everything is already cooked, so you’ll reduce the cooking time to about 20 minutes. This allows everything to heat through and meld the flavors.

Can you cook white beans and ham in the Instant Pot?

How to Cook White Beans and Ham with Bacon

Prep time: 10 minutes, not including soaking the beans overnight

1. Rinse the beans, dispose of any that are broken, and take out any debris. 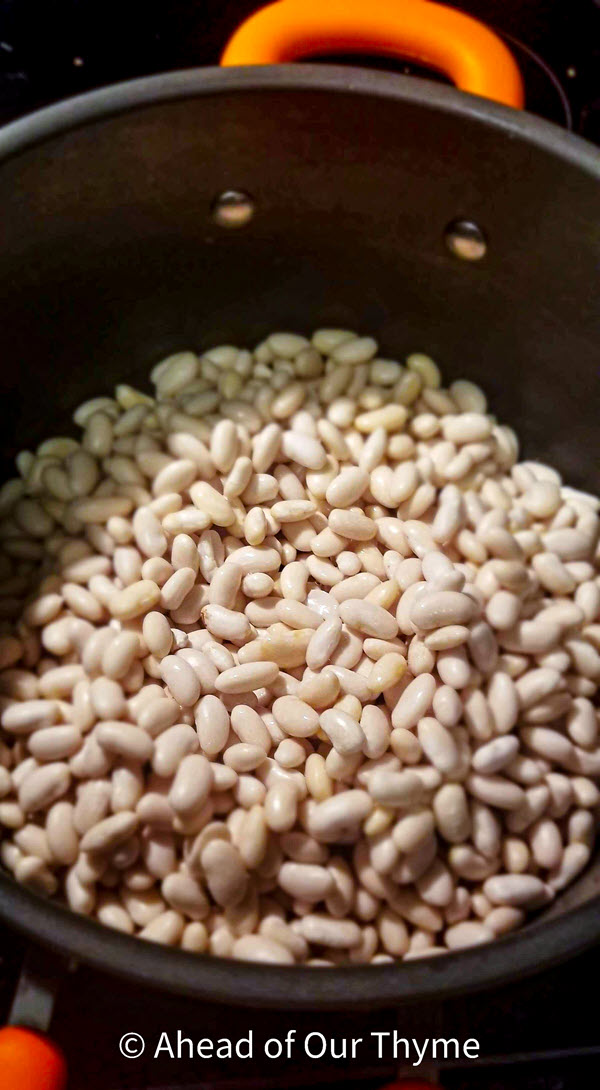 2. Put the beans in a large pot, and fill it full of water, about 3 inches over the beans. Soak overnight.

3. Chop the bacon into half-inch pieces and dice the ham. 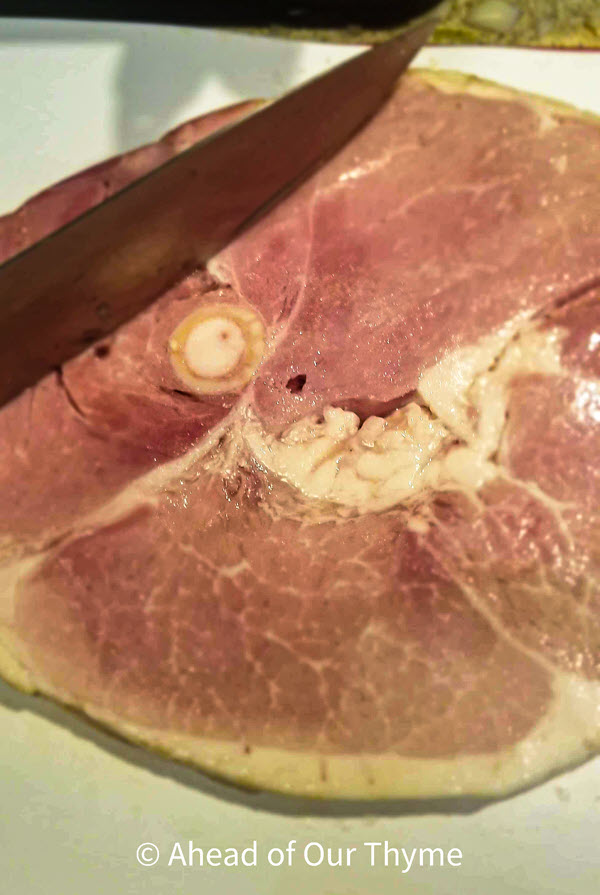 4. Cook in a heavy skillet until almost crispy. Remove from pan, and set aside.

5. Drain water from the pot where your beans are soaking and rinse the beans.

6. Add 8 cups of chicken broth to cover the beans by about two inches.

7. Add the diced ham steak to the pot. 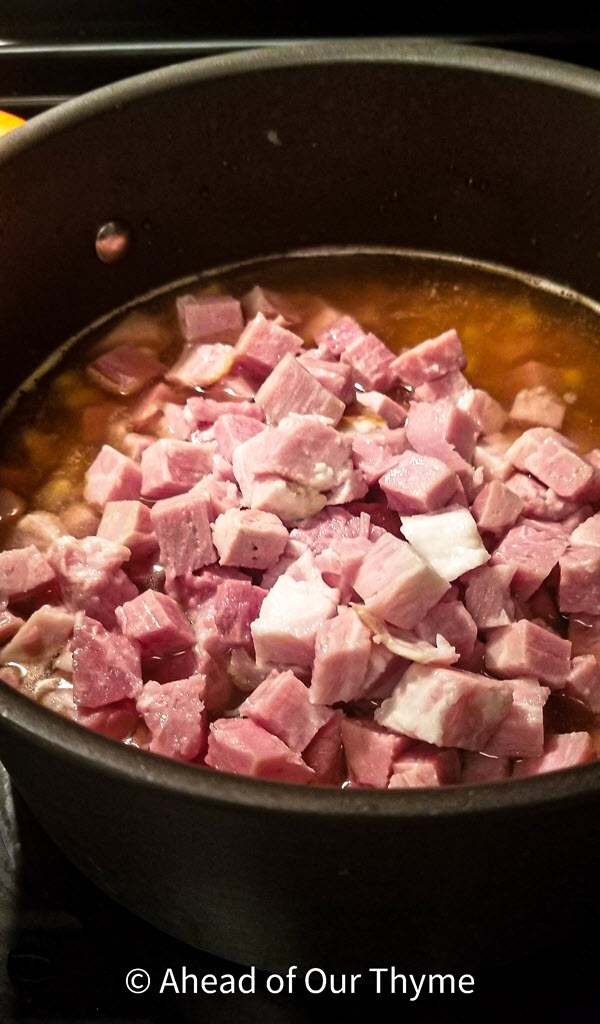 8. Add the celery and onion to the pot. 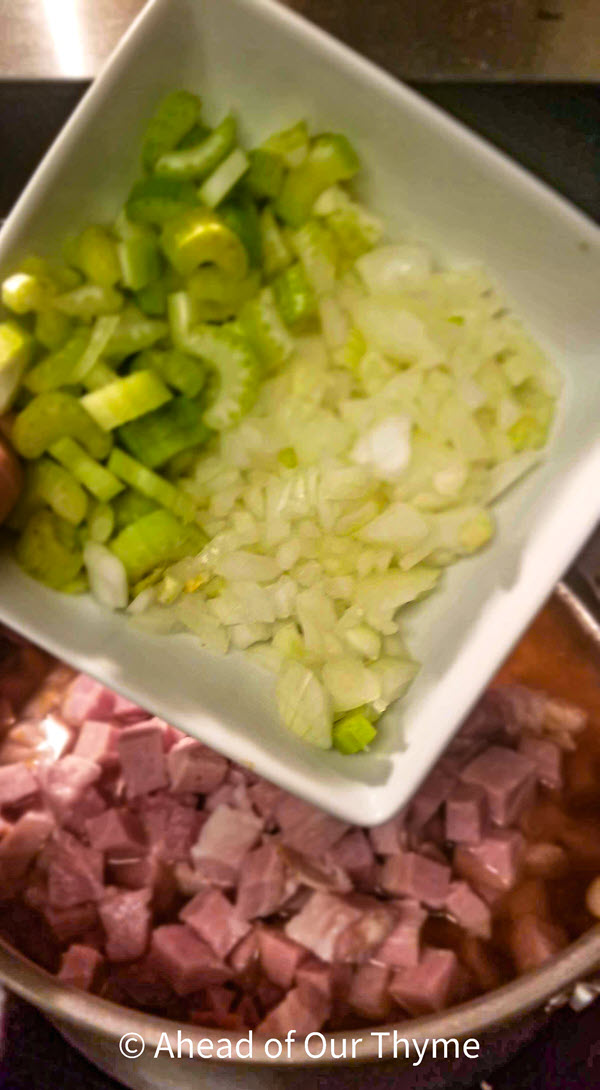 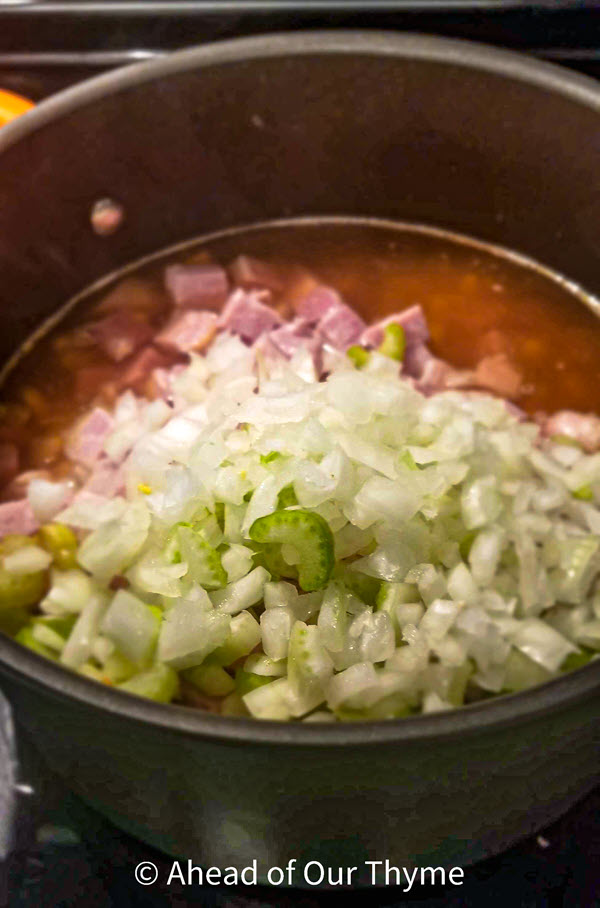 11. Add the Cajun seasoning, salt and pepper, and parsley. 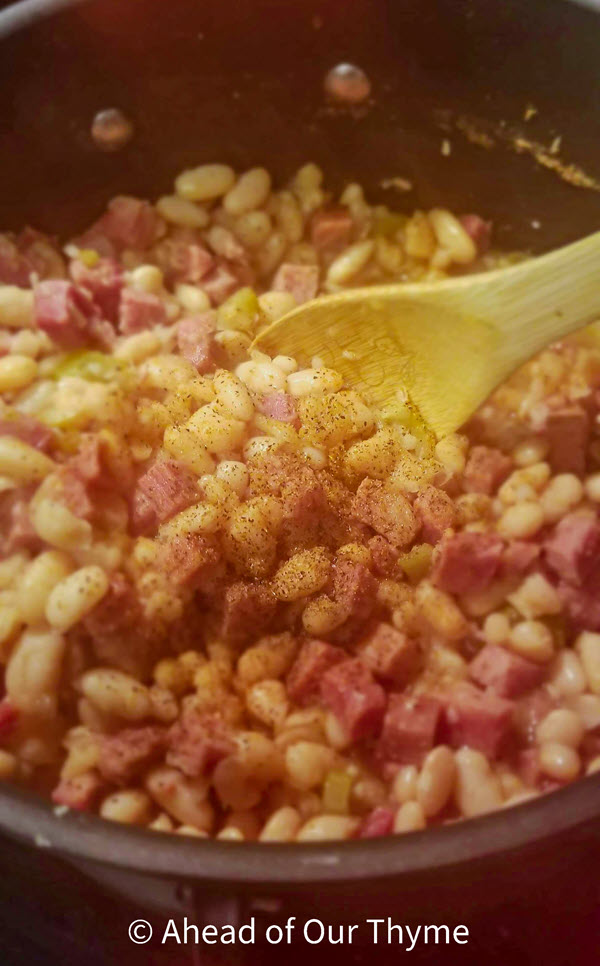 12. Simmer for another 30 minutes, then add the bacon. Stir well.

13. Serve with white rice, and garnish with green onions. 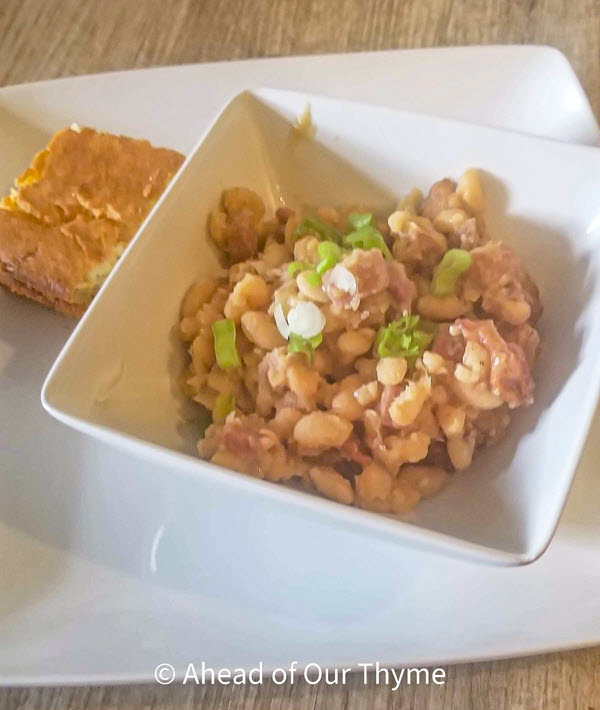 Here’s a great video to show you how to make white beans and ham. 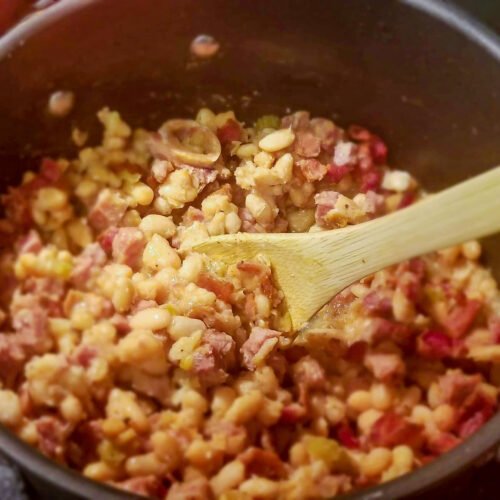 Be sure to review this recipe, and say hello to us on Facebook and Instagram. Thanks for stopping by!

Thank you for the kind review, Linda!