Corn maque Choux is an easy New Orleans Cajun recipe to make. This delicious New Orleans recipe is made of corn and peppers sautéed in bacon grease and spiced with Creole seasoning or Cajun seasoning.

Or, if you have the time, you can make your own mixture of Cajun seasoning for your favorite Cajun and Creole recipe ideas. It’s handy to have this Cajun seasoning on-hand for recipes such as gumbo or a seafood boil (shrimp boil).

Cajun food is known for being well-seasoned, but some people misunderstand this dish as spicy.

Corn cob maque Choux is an excellent side dish that goes with just about everything.

How Do You Pronounce Maque Choux?

You may not have heard of this dish because it is rare to see it on a restaurant menu, and I don’t get it since it’s delicious and surprisingly easy to make.

The Cajun corn dish is very popular in South Louisiana.

Now, some people say that maque choux is a Creole dish, but I’ve always heard that it’s a Cajun side dish. Regardless of who can claim it, Cajuns and Creoles have a vibrant history.

This recipe is a vegetable dish mixed with bacon (bacon is everything in southern cooking), and it is delectable.

When Did Maque Choux Originate?

What is the history of maque choux? I’m not sure when this beloved Louisiana recipe originated, but I did find a reference via Google that dated it back to 1930. Cajuns, by the way, first went to Louisiana between 1765 and 1785. And that’s something that I could write a book about. They have quite a history of trying to find a country to call home.

I like to gather the ingredients before I start cooking a meal, including sea salt and black pepper.

For this dish, you’ll need to round up:

Slap Ya Mama or Tony Chachere’s are good Creole seasonings. When you make this dish for the first time, it will taste as if you’ve made it for your entire life. Well, not your entire life. I’m pretty sure that there aren’t any cooks that are toddlers.

You only need one pot or pan to create this yummy dish. I’ve seen some recipes that call for tomatoes in the maque choux, but I just cannot with those people. But if you want to, you can add diced tomato. I won’t tell on you. You’re going to have to do a fair amount of dicing of the vegetables. I try to use red bell pepper and green bell pepper, but I tend to use what I have in my kitchen.

And who wants to go to the store for one red bell pepper? Not me. No sir. So, I’m just using the green bell pepper. So there, world!

Can You Use Canned Corn in Maque Choux?

You can shuck some fresh corn kernels or use frozen. Or you can use frozen shucked sweet corn.

In a pinch, you can even make maque choux with canned corn that is drained and rinsed.

If you want to try some other ingredients for this corn maque choux recipe, go for it!

If you use cayenne pepper, remember that a little cayenne goes a long way.

And you can substitute andouille sausage for the bacon. It tastes delicious both ways.

Do you want to use butter in your maque choux? We’ve seen recipes that call for butter. If butter is your thing, go for it.

This delicious Cajun recipe is loaded with delicious veggies, so it’s a dream recipe for people who are following the Weight Watchers diet (now WW).

For the bacon, you can use pork bacon but maybe use a little less of it. Two slices of crispy bacon have just 4 Personal Points, and some folks consider this to be a worthy splurge to experience the joy of bacon.

Alternatively, you can use turkey bacon. Two slices of turkey bacon have 2 Personal Points.

In addition to bacon, you can also make your maque choux with turkey link sausage. We have also seen maque choux made with shrimp.

What about sauteeing in bacon grease? Bacon fat adds a lot of flavor, as does butter. However, if you’re following any type of diet, you can always use olive oil, which is not saturated fat and is healthier for you.

For the heavy cream that this recipe calls for, you can easily substitute any of the following:

Tiff follows Weight Watchers and she said that for this maque choux recipe, she would splurge and enjoy that creamy fat free half and half for 2 points.

Can You Freeze Maque Choux?

Notes: You can absolutely freeze your cooked maque choux. It should stay good in your freezer for up to 3 months. 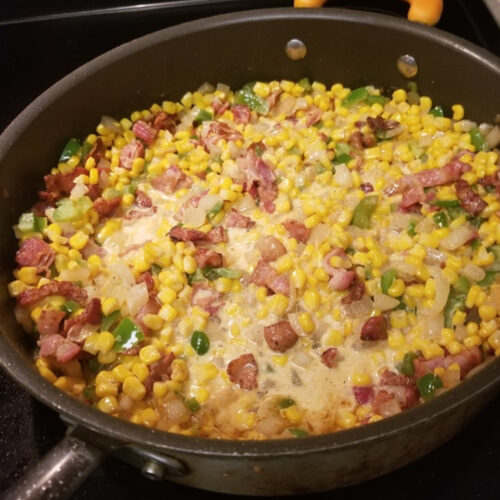 Before you go, be sure to review this recipe, and tell us how your maque choux turned out. Let us know in the comments if you tweaked the recipe. Also, please give us a follow on Facebook and Instagram.